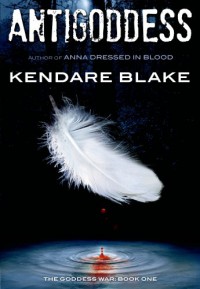 I read Antigoddess as my first book club book with the fantastic ladies over at bookishlydelighted.blogspot.com. I have had this on my to-read shelf for awhile now, and was thrilled when I saw it would be the book of choice when I joined! And it did not disappoint, but it is from Kendare Blake so I really didn't expect anything less than amazing.

I absolutely love mythology, and am always game to read from authors who take that basis and bring it to a modern setting with their own personal flare. 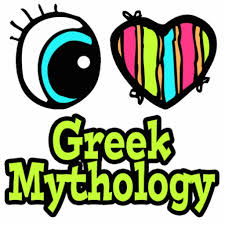 I loved the way Blake put her stamp on this story. The gods are long past being relevant in this modernized world, add in the fact that they are also approaching the Twilight, which for them could mean an end to their existence completely. There is still a lot of mystery behind what this Twilight really entails, but it is slowly draining and torturing these once immortal beings and making them vulnerable to all sorts of things....even death. Of course Gods being Gods, they are rather adverse to seeing the end of their very long existence, and most of them are willing to do whatever it takes to stop this agonizing process.

It ultimately comes down to two different groups of gods, one side mad with the will to live and ready to destroy anything that is in their way, and the other side that are essentially the lesser of two evils. You can't quite say they are the "good guys" for they aren't your typical heroes. But when faced with impossible situations, they try to make the best decisions they can. You also get to see them struggle a little with their humanity and the repercussions to a lot of choices, some not very good, that they have made over the years. It's always fun to see that internal struggle in a character. It feels very relatable, for who amongst us has not made poor decisions or acted unfairly to others at one point or another? But you get to see that transition into actually taking responsibility and dealing with the regret and how it shapes the hard decisions they have to make now. The characters were so rich and multidimensional, it was a joy watching them grow and progress throughout the story.

There were many twists thrown in, and some pretty awesome battle scenes. I have to say that every time I thought I knew what was going to happen next, I was completely wrong. EVERYTIME!

This book never stopped keeping me on my toes. It was a great first book in what appears to be an incredible series. This was quite clearly only the beginning, and I can't wait to see where things go from here!