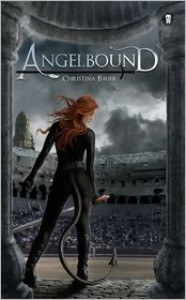 FAN-FREAKING-TASTIC! This was Young Adult done right. Angelbound is mature enough to capture an audience of any age, yet still emotionally believable enough to be categorized as Young Adult. Christina Bauer did what I personally like to see in YA, she didn't dumb it down, or pretend that sex and swearing are things that older teenagers think about or do. People that's why its called Young ADULT, not middle school age. I like to see authors who aren't afraid to add that realistic element to the story. I will admit in the very first few chapters I thought that this might have been another one of those YA books where all the girls are dense, boy crazed, angst-riddled messes....but I can't tell you how glad I was to be proven so very wrong. It didn't take long at all before it was apparent that was not the case, and these characters had more depth than that, well most of them anyway ;) There were a few that were pretty vapid, but ya know, such is life! I can deal with that. In moderation.

Myla was a great leading lady. Fierce, snarky, honorable, brave, curious, mischievous, and loyal to the people she cares for. This Quasi was on a mission to kick ass and find some answers to the burning questions of her past. Ultimately, unearthing so much more than she bargained for. The secrets of her past are going to collide with everyone's future, in ways she never could have imagined. But don't despair, she'll also find some pretty amazing people along the way, even some she couldn't quite see that were right under her nose all along.

Lincoln *sigh*, the HIgh Prince of Thrax, and warrior badass, was one of the aforementioned people. He was admittedly kind of a jackass at the beginning, but it did fit with the story and the prejudice the Thrax had against any demons in general. In my eyes he certainly redeemed himself and proved to be an honorable dude. The more I found out about Lincoln, the more I liked him. I loved the romance factor here, it was slow building and felt genuine. Both Myla and Lincoln were warriors that understood and challenged each other in ways that neither of them were used to encountering in other people.

Any fan of paranormal books has probably encountered an angel or demon book or two along the way, I sure have. I've read some great ones, and some not so great too. The paranormal element in Angelbound knocked my freaking socks off! It was a fresh and unique take on the lot, and I was happy for it. Each chapter drew me in more and more. It also added layer after layer to what became an amazingly large world, that I'm pretty sure we've only just glimpsed the surface of. At least I hope so anyway.

It started out as, what I thought was, a pretty cool idea. The Quasi(the demon/human hybrids) a race of people basically imprisoned in Purgatory and indentured servants to the ghouls, but all under the control of their lord, the King of Demons, Armageddon. Which btw, is a major badass. The Quasi's whole lives are basically preparing them to, once they graduate school, serve the ghouls, in every imaginable way....*gags* and some of those ways were definitely disgusting. So if you're like me, you're all like "ok this sounds neat" and then BAM!

You get more awesomeness! Suddenly we're introduced to a much broader world than you originally thought. A world in layers, with not just Purgatory, but multiple dimensions and all their many inhabitants. There are full demons, in all their grand despicableness, full angels, in all their glory and some trickery, Thrax(the angel/human hybrids, and demon hunter extraordinaire)and of course the intriguing Ghouls, who run Purgatory under the thumb of the evil dictator, Armageddon. As the story progresses you get a more in depth look at each individual race, and let me tell you, it's riveting stuff. It was very interesting learning the hierarchy in each group and the way they all work. The world building here was absolutely breathtaking.

There is just so much more to rave about with Angelbound. This was a fantastic first book in a series, there is no limit to where the author could go from here. There are so many faucets to this world that Christina Bauer has created that if she wanted to she could keep me enthralled for many books to come. I know that there are at least two more books in this series, the 3rd not being released until October. I'm not sure if this is only meant to be a Trilogy or if that's just all we know about so far. Either way, I'm totally in. Like I'm going to download the second book immediately. Not going to lie,  I have some pretty high expectations at this point.

Beyond the paranormal there was a lot of mystery going on too. Myla was determined to find out answers about where she came from and her mother's hidden past. And quote Myla, UNHOLY HELL, you're in for some crazy stuff. I love the way it all came to light little by little too. The more you found out, the more questions you had. Hence the more you sat on the edge of your seat waiting for the next revelation. Also all the races were acting increasingly suspicious and out of sorts, so that added a whole new mystery too. There weren't really any dull moments in Angelbound. It seemed to have a little something for everyone to enjoy. I could really go on and on singing it's praises, but I'll try to wrap this up now for you. If you're still wondering whether this book is for you, ask yourself these questions...

Do you enjoy exciting stories with strong world building and unique paranormal aspects?

Do you like a strong female lead that demands respect and find/causes some trouble wherever she seems to go?

Not sold yet? Did I mention the Arena, where souls have the option of choosing a fight to the death to gain access to Heaven? Oh yeah, some pretty epic battles go down in there, and out of there too.

Like magic? Yep, it's got some of that too. Hello enchanted horses!

How about some slow building romance? Yep. It's got that too, in spades! Expect to swoon, multiple times.

If the answer to any one of these is yes, I say give this book a try! I am honestly shocked that virtually none of my friends have read this yet! I, obviously, highly recommend it. Lastly, as if you need further enticement, it is currently only $1.99 as a Kindle E-book. Just sayin'.