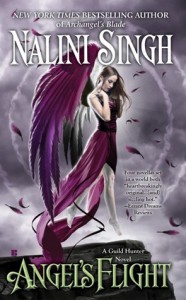 Angels' Pawn was one of my favorites in this collection if short stories. It starred the vampire Janvier and the badass Guild Hunter, Ashwini. They have this whole Romeo and Juilet vibe going on, but are still standing on their opposing sides, just flirting with the idea of something....more. And they are two people who have a truly unique way of flirting, and I like it.

Angels' Judgement was a story about Sara Haziz, Guild Hunter, and her journey into the illustrious role of Guild Director. She faces some unforeseen obstacles before she takes on her new position in the Guild, one of which involve a sexy new relationship with the Slayer; a legendary member of the Guild that hunts fellow Guild members that stray down the wrong path. It was a nice little addition to the series and it was interesting seeing Sara's rise to power.

Angel's Wolf was my other favorite in this book. It told the story of Noel, vampire making his comeback from some hellish torture, and Nimra; a 600 year old Angel who rules Louisiana with a supposed iron fist of cruelty. Both Noel and Nimra were two very unique and interesting characters. Neither if them were what I was expecting, and in the best ways possible. I really loved their story and was glad to have read it!

Angels' Dance was the story of beloved, and crippled beauty, Jessamy; teacher of all the sacred fledgling angels and keeper of the Angel histories. And Galen, new to Rapheal's Cadre, badass weapons master from Archangel Titus's court. Jessamy and Galen couldn't have been more opposite, her a delicate, educated bookworm and motherly figure to pretty much everyone, and Galen a brutish warrior and man of few words. But you know what they say, opposites attract, and that they did in this story. Probably my favorite part of this story was seeing that Galen was the one that started the nickname of "Blubell" for Illum. That was a cute, fun little fact :)

These were all nice little additions to the rich world of the Guild Hunters. But really it just made me want to read a full book in the series, I forgot how much I really enjoyed this series. And here is some anonymous fan art that was posted on Nalini Singh'a website which I thought was kind of awesome and decided to throw it in here...