A THOUSAND NIGHTS BY: E.K. JOHNSTON 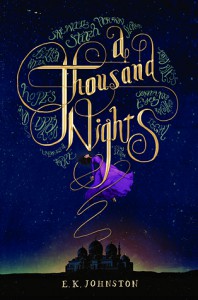 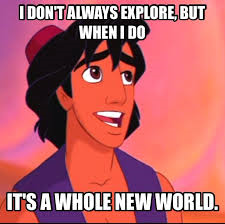 The exoticness of the setting was highlighted beautifully through the likeness of it's narrator. The "Lady Bless", which funny enough I don't think we even learned her true name, just titles like the one above for instance that were used by many characters. I loved seeing this world through the shrewdness of her eyes. She had am uncanny way of reading people and feeling so much while letting almost no one in on her true feelings and emotions. It really was no stretch of the imagination to see her effortlessly take the role of Queen. It was made even better when you threw in the humbleness, appreciation for hard work, strength of character, and the grit it takes to survive in such a treacherous place.

On the other side of the token, when we got glimpses through Lo-Melkhiin's eyes it felt as detached and devoid of emotion as the character himself, which was also nice. I liked getting the peeks into his mind and the depths of his wickedness, it only helped Lady Bless's observations of him seem more intuitive and precise. I was very intrigued about what made Lo-Melkhinn tick and what exactly he was capable of. It was apparent by the fact that he had already slain 300 previous wives that something sinister was definitely afoot.

The setting itself really took on a life of it's own, which I absolutely adored. The severity of the setting only helped build stronger characters. You knew that to survive in such harsh conditions that they had to be made of sturdier stuff. I really appreciated the unique voice that told this story. The plot was very interesting. I thought there was a harmonious balance of dark and light in this story. You got the feeling that Lo-Melkhiin had, possibly, finally met his match in his enigmatic wife.

I really felt as if I was transported to this mysterious, magical land from the very beginning. The writing was so visceral and descriptive I felt almost as if I could see in vivid color every swatch of cloth, grain of sand, or creature lurking. Truly beautiful writing and along with an intriguing plot it made this a fabulously effortless read!

I received a copy of this book from Disney Book Group, Disney Hyperion via NetGalley in exchange for an honest review.