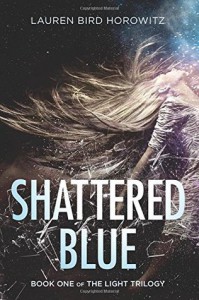 Wow. Just wow. What can I say about this book?! It was fantastic, and bursting with surprises. It went in so many different directions that I never saw coming, and I truly loved every twist and turn. Shattered Blue really knocked my socks off! I love that feeling you get towards the end of a great book when you are up in the middle of the night, unable to rest until you've absorbed every last word, and even afterwards you lay there, a bundle of untamable energy just marveling at the sheer brilliance of what you just read.

I think the thing that really got me was I wasn't exactly prepared for how smart and intricate this plot ended up being. It was sneaky, like a ninja. I feel like Shattered Blue started out being something smaller, something simple but still good, I just wasn't expecting it to rock my world like it did. About halfway through little things started happening, adding an extra layer here and an extra layer there to the plot line, and by the end the only thing shattered was my mind! This ended up going in so many new exciting places and I seriously don't know how I am going to get through the agony of waiting for the second book when this one isn't even released yet!

I also have to add that I have read a decent amount of Fae books, and some of them are my favorite books of all time, so I have to give this book credit for coming into this scene, amongst some heavy contenders, swinging hard. I liked that there were some very unique elements to these Fae and their world. It was a fresh take on something that's been done many times before and I really appreciated the exceptional additions that made this story something different.

The romance was also something I can say took a turn in a direction that I was not anticipating, and the story was much better for it, in my opinion. This was yet another aspect that I thought I had a figured out and it ended up growing into something with a lot more depth than I was expecting, and quite a few shocking twists. I wasn't entirely impressed with the feel at the beginning where I thought that this was going to be an insta love type relationship. I really loved that as the story progressed and the characters matured, so did their relationships. I think there was a great play on the naivety of falling so hard so fast for someone that you really might not know as well as you thought you did, and the dangerous and damaging consequences of such. I thought it was a genius move and I really can't wait to see where the next book will take things!

I did enjoy the shifting points of views as well, my only real complaint about this book would be was I think that it would have been better, or would be better in the future books, to keep the POVs down to maybe the main 3 characters. I didn't think a few of them, Mile's voice for example, added much of anything to the story, and I felt it was kind of unnecessary. But who knows, maybe I am wrong and that's some sort of set up for him to bring something more in the future books. I was just a little confused by his narration in this one.

All in all this was an awesome read, I was super impressed and will definitely be on the lookout for the next book and more from this author!